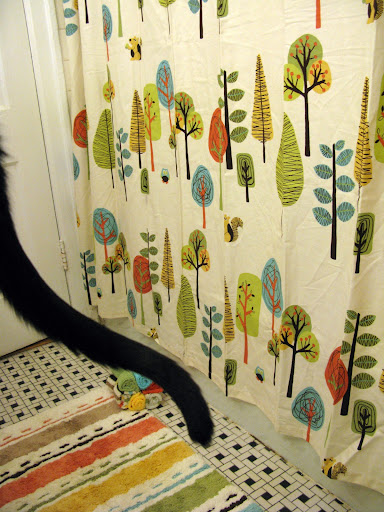 I bought our first fabric shower curtain! I feel like a grown-up. It has a complementary bath rug and even a few washcloths. I LOVE it. It has squirrels on it!

Oh, and Sidney jumped on the counter in the middle of the picture. As he does. And I let it go because it amuses me!

In other news, I’m ignoring the fact that the new bath accessories do not actually go with the horrid floor. I’m just going to pretend that floor is not there. I hate it so. much.

In still further news, we are plotting exciting summer trips that will yield charming and grand photos for your enjoyment.

Our blog URL is probably changing. Stupid Blogger! Anyway, I’ll make an announcement on that soon. Now I’m going to do homework (sob) and then watch a little TV. Just another wild night in the big city…

I mean to post this awhile back but since it’s a wintery day, thought I’d share. My co-worker Silvia took this photo from our office window with her iPhone–we love to see the bean in every kind of weather!

Mr. Squirrel pigged out on the porch and had to stop and rest for a spell.

For a sneak peak at Dale’s recent photo shoot check out the company’s blog. They took a few behind-the-scenes shots.

I’m not sure what I can share but odds are good that the photos Dale took will end up in a national hot rod magazine. We’ll keep you posted.

We are pretty well buried in school this month! I’m in class Monday and Thursday nights and Dale is in class on Monday and Wednesday night! I’m taking two classes and he’s taking one.

In super sekrit and exciting news, Dale did a photo shoot last weekend that might just end up at your local magazine rack. Can’t share the photos yet but I can tell you it was a shoot of a custom hot rod. We’ll share more info–and photos, of course!–as soon as we can.

Sorry for the weak update and we’ll try to get a more exciting life in February.

It was pretty quiet around here last weekend! Sidney found a cozy spot–in the middle of a pile of clean towels in a laundry basket.

We bought an attachment for the vacuum that cleans ceiling fans. Greatest purchase ever! However…

Bela *hates* the vacuum. And he loves to nap.

We also added to the money pit Wii by purchasing a Wii Fit. This is Dale’s avatar hanging out with virtual versions of Monty and Sidney. They’re going to exercise now!

We don't want to take down the Christmas tree…

Nobody wanted to take down the Christmas tree. Could you take the tree down with a kitty this sad about it? Of course not!

So we left the house yesterday and didn’t get home until about 9:30 with one final, epic distraction:

Needless to say? Tree is still up!

We had a lovely New Year’s! Since we didn’t have a lot of time before or during Christmas, we opened our presents after Christmas once we got home. The carnage was still evident on New Year’s Eve.

Dale was a cooking fool on NYE. (I made the enchiladas the day before and they were very, very good). Dale made chocolate espresso mousse from scratch. Delish!

He also made a batch of his grandmother’s homemade chocolate syrup. In this picture he’s also showing off what was probably his favorite Christmas present of the ones I gave him. He has used the infrared laser thermometer for all his home-style cooking this year.

However, dinner was the real prize. He made crab cakes. very, tasty little brown puffs from heaven!

We served them with a lemon wasabi sauce we bought ages ago back when we first went to Lake Geneva!

We started the new year with fresh homemade hash browns. My mom would be happy to know that Dale is putting the Kitchen Aid she bought for him (seriously, she gave it to him, not me).

And it wouldn’t be a post from me without the cats. I went to make the bed and Monty was sitting on the edge of the bed, transfixed. Two squirrels were feasting on the seeds I left out for them. Monty is deeply fascinated by woodland creatures. Particularly when they show up on the porch of our third floor apartment!

Hey look! It’s a blue moon. The moon is full and crazy bright tonight–as is the moon over my tiny village! Ha! Happy New Year, people!

Dale and I celebrated Christmas last night–finally! He had to work late but we went for a late dinner at our favorite place and came home and opened presents! It was fun. We both had a great night and got some goodies we’ll enjoy all year long. For the nosie ones: Dale got a circular saw, a case for his light stands, and a few smaller items. I got a BodyBugg, Twin Peaks Special Edition DVD, a couple of books and the CuteOverload calendar.

Had a great holiday season–hope everyone can say the same!

Try out a new color scheme. Select below to see an instant change!